Dan co-founded The Executive Council with Clyde Bryan to fill a need for a better organization of professionals. His life experiences, and who he was as a person, fostered the recognition of that need and the creation of the group. 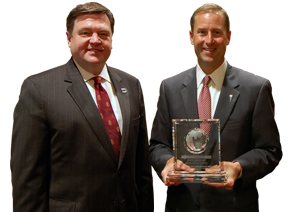 Born on November 28th, 1953 in Alexandria, Louisiana, Dan was only one generation removed from the farm. He retained the work ethic and entrepreneurial spirit of a family who worked the land. He was raised Christian and conservative, distrustful of institutions, but loyal to his church.

After graduating from Louisiana State University, he married Peggy Foster (Hoyt). In 1978 they moved to Houston, where they raised their two children.

Business interests captured Dan’s imagination at an early age. He subscribed to Forbes magazine at age 16. Alliance Corporate Development was his principal entrepreneurial concern, founded in 1985 as a management and financial consulting firm. Along with the city of Houston, ACD experienced all phases of the business cycle, and at its peak had 12 employees.

To Dan, one had to understand international commerce, especially finance, to understand current events. The two were inextricably intertwined in his mind. He believed every leader in business must have a thorough knowledge of the world around him. Further, every business leader has a moral obligation to pursue his Christian duty to serve others and make the world a better place.

Dan opened each TEC meeting with a current events update, helping fill the need to keep members well-informed. It is a clichéd truth that the news is rarely happy, and even more so given Dan’s penchant for stories about creeping global authoritarianism. Undeterred, Dan maintained an air of levity during these updates with his wry sense of humor.

When Dan met Clyde, he found a kindred spirit who shared his vision of a better world through better leadership. TEC is the fruit of their vision, a vehicle for the kind of leadership the world so urgently needs.

Dan and Clyde aimed to create a new category of networking organization. TEC would benefit its members financially, professionally, and personally, but it should also impact the world in a positive way.

Dan passed away in an auto accident on July 12th, 2007. The members of TEC continue to recognize him in the most meaningful way we can: realizing his vision for TEC and growing it into what he knew it could be.

Message from the Vice President: The Agenda

Remember the last time you went to a meeting and nothing was accomplished? Worse yet, an individual or group attempted to take over and run the meeting?

Holding a meeting without an agenda is an invitation to disputes, disengagement and a general waste of time for all parties. Of all the undertakings that corporations and groups utilize on a frequent basis is the “meeting” and most meetings fail to produce their desired outcome.

Do You have a question? Ask.